In my previous post, you’ll know that I spent Nuit Blanche with the Art of Fashion‘s 2012 Design Competition. Held at Hazelton Lanes in Yorkville, Art of Fashion’s 2012 Design Competition featured 10 extremely talented upcoming designers, all competing for the prestigious titles of ‘Canada’s Most Promising Designer’, ‘Most Promising Designer’, and ‘Best Exhibit’, to name a few. As well, a $30,000 prize pack was in the running.


Designers were given the opportunity to explore and interpret the ‘unassuming details of everyday life’. Winners would be selected via their theme interpretation, exhibit, personal expression, cohesion, technical skills, creativity and overall design originality.

The picture below are the ten designers in the competition. I will give a breakdown of all their exhibits and designs below. Beware – PICTURE and TEXT heavy, but well worth it! 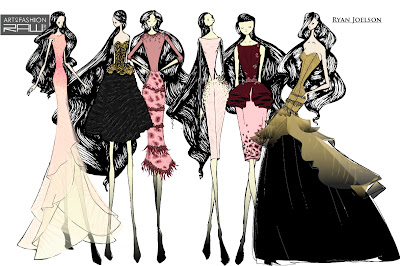 Ryan’s piece was called ‘Rough-Hewn’, and infused a manipulation of raw materials through delicate textures. Particularly, he wanted to shape his designs without finishing. You can see that his dresses contain ‘petals’ – he used a unique method to that allowed for a ‘sharper visual, without the burden of threads’.

Amy’s piece was based on the six elements. She’s included a new element – ENERGY. She’s also incorporate the ‘RAW’ feeling of the event into her exhibit. She’s used raw edging in terms of her details, pleating, edges, ruching, etc. She’s touched upon the power of the earthly elements, and each element is showcased in it’s own piece. 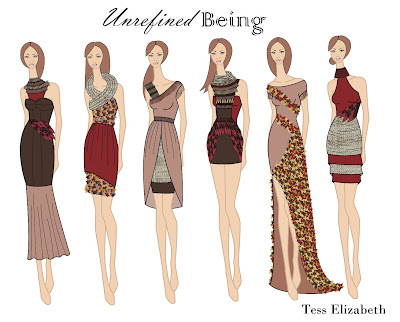 Tess Elizabeth’s piece was called ‘Undefined Beings’. Her exhibit came from the idea of nature itself – she describes it as if ‘the collection came from nature itself’. She’s used a lot of different natural elements in her design – feathers, wooden beads, organic cottons and knitted wools. Her colour palette was driven from nature, but in an unpredictable way. The colour scheme almost reminds me of ‘autumn’ – she’s used a bunch of deep greys, light purples, and burnt yellows.

Mary’s collection relied heavily on the planet. All of her pieces were based upon some aspect of the planet – i.e. Animal, Fire, Oceans, etc. Each piece’s colour palette was based on it’s element (i.e. oceans = blue). She describes her piece as a ‘relevant statement’ to the global concerns of today. 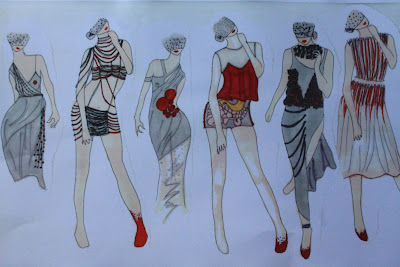 Robyn is also a costume designer, as well as a fashion designer. She’s incredibly interested in the details of the human skin. It’s incredibly apparent within her designs, as they show and enhance a lot of the model’s skin. She’s interpreting the model’s skin as part of the design itself. In turn, she’s turning her pieces into works of ‘pain’ – she wants her designs to reflect the pain within a person, the details one hides and their imperfections.

Devlyn’s piece is called ‘Grist’. Her exhibit is a reflection of individual pieces, and what happens when they are taken apart and brought to their roughest and simplest form. The pieces are said to take on the mental and physical imprints of life.

Anouk’s piece is called the ‘Resplendent Warrior’. Her’s was my personal favourite. Her pieces sought to create a link between the armour a person wears and the skin / human beneath it. She calls it a raw emotional experience that only the wearer can possess. All her pieces are boosting with femininity, with a hint of masculinity within it. Personally, her pieces had such delicate designs and was pleasantly divine right down to the last detail.

Tessi’s collection was called ‘A Night At The Opera’ and it consisted of all black pieces. Her pieces were influenced by the femininity of women’s body, and the tailoring of men’s clothing. Using opposing elements, she’s created classic pieces, perfect for a night on the town.

Jenni’s exhibit was called ‘Undulation’. Her piece focused on the limitations of fabric and using the least amount of fabric to achieve the maximum amount of results. Using the fabric to the best of it’s ability means the designer is able to maximize fashion with minimal fabric. Her pieces also focus on structural elements – zippers, leather, etc. Her one piece leather outfit? Awesome.

Voting has been open all week at the Art of Fashion’s official website. A winner has yet to be announced, (it will be announced tomorrow!), so I’ll be sure to create a follow-up post on it. All the designs were amazingly beautiful. The group of designers were so talented, I was completely blown away by their imaginations and creativity. All of them deserve to win, in their own way.

Which one is your favourite? Big thanks to Alessandra Travali for being such a wonderful photographer. As always, leave a comment or my email is ashley@torontobeautyreviews.com.

NOTE: All sketches courtesy of own designer.
Share on social: