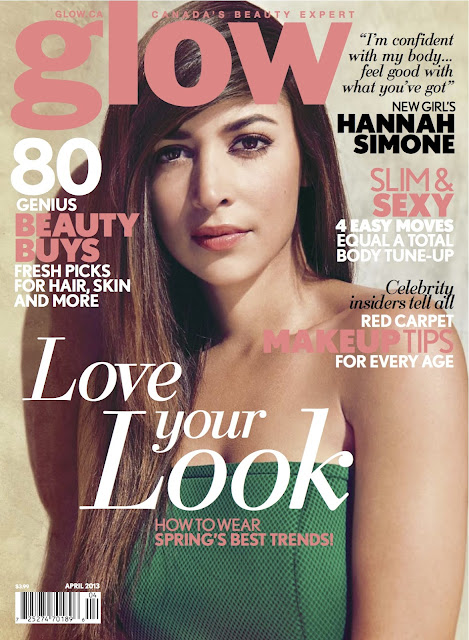 GLOW Magazine has an exciting April issue ahead – and it features New Girl actress, and former MuchMusic VJ Hannah Simone!

GLOW Magazine sits down exclusively with the 2012 Teen Choice TV Breakout Star award winner to discuss girls on television, Hollywood’s skinny obsession, the word ‘curvy’ (she hates it!), and her own beauty routine. For someone so beautiful, I’m definitely interested in what make-up and products she uses!

Here are some excerpts from the interview:

ON FEMALE DRIVEN COMEDIES LIKE New Girl, Girls, AND 2 Broke Girls TAKING OVER TV: “It’s an incredibly exciting time to be a comedic actress. There is this demand for smart, funny, attractive women.”

ON HOLLYWOOD’S SUPER-SKINY IDEAL AND HER BAN ON THE WORD ‘CURVY’: “Curvy is just a polite way of saying fat. And I’m not. Curvy and voluptuous – that one also got dragged through the mud, that poor word. It really just means a woman with breasts. [But] I’m confident with my body. [My mom always told me] to feel good with what you’ve got.”

ON BUCKING THE ‘DUMB MODEL’ STEREOTYPE IN HER CHARACTER, CECE: “Most high level models that I’ve ever met are actually well-travelled, they’re cultured, and no guy laying a cheesy line on them is actually going to impact their world. They’ve heard it a million times…and they walk away from it. So I brought that to the character.”

ON BEING A VISIBLE INDIAN ACTRESS ON PRIMETIME TV: “I remember thanking Liz [Meriweather, New Girl creator / executive producer], and saying ‘You’ve no idea what you’ve done, that you’ve put this Indian actress in this visible role, where it’s not about her ethnicity.”

Check out Hannah’s Beauty routine; I personally love her choice of Must Have beauty product – Benefit Bad Lash Mascara. Definitely a must have for anyone’s makeup bag! 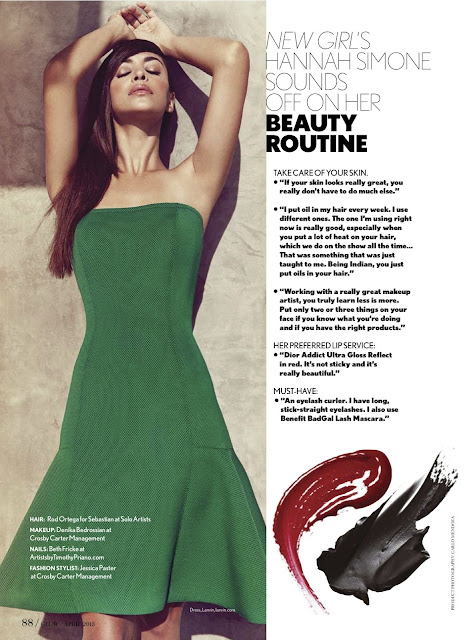 What do you think of this feature? Anyone watch New Girl? Leave a comment or tweet me at @AshleyMcKernan!